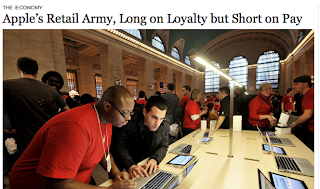 Last Sunday's New York Times front page lead was a feature story about the majority of Apple's U.S. employees, who are employed in low-level customer service jobs in Apple Stores. The story, which the Times researched for several months, resonated with me both for the similarities between Apple and Trader Joe's (which readers of Build a Brand Like Trader Joe's will be familiar with) and some of the differences in the way employees are treated.

I particularly noted that Apple, like Trader Joe's, hires for personality and not product knowledge. As the Times put it, "the candidates of choice are affable and self-directed rather than tech-savvy. (The latter can be taught, is the theory, while the former is innate.)"

When we first moved to Kansas City, my wife thought that the Apple Store might be a good place to work while we established ourselves. She went through an elaborate, three-interview selection process and a background check worthy of applying at the FBI. It wasn't until she was finally offered a job that she was told the starting wage would be eight bucks an hour. When she declined, the HR person she was talking to was completely flabbergasted. It was obvious that no one ever turns down a job there.


Although Apple recently gave senior retail staff substantial raises, the average rates of pay in Apple stores are no higher (and starting wages are not as high) as Trader Joe's -- despite Apple Stores' world-record rates of sale of over $5,500 per square foot. Considering the vastly higher margins that prevail in tech sales, compared to grocery sales, it's not surprising that the Times found many Apple customer-service employees feel underpaid and more to the point, undervalued. (As at Trader Joe's, employees are forbidden to talk to the press, so the only people quoted by name were ex-employees.)


If anything, Apple's even more of a cult than Trader Joe's, and some of the descriptions of Apple's selection and indoctrination procedures had me rolling my eyes. And the pace of work in the stores is grueling. Again, if anything tougher than TJ's. Many of the Apple Store employees spoke of working through long shifts without even a bathroom break.


For now, it seems there are enough Apple devotees to feed the stores' appetite for low-level customer-service staff. And I have to say that in my own experience, I've usually had satisfactory experiences in the Apple Store. (I have an iPhone, an iPad, and I'm posting this on an iMac, so I spend some time in there.)


In the long run, Apple will run out of acolytes willing to work too hard for too little. The thing is, Apple probably doesn't have the metrics it needs to know when that happens. If it's just a little less pleasant to visit the Apple Store, because the average employee is a little too tired and a little too resentful, sales will slow. But will Apple know why?


The Times notes that there are very limited opportunities for advancement on the retail floor. That is a problem I identified at Trader Joe's, too. Companies like Trader Joe's -- and even more so Apple -- can afford to retain top customer service staff longer, and make customer service a viable career. I believe that's a better strategy than just taking it as an article of faith that there will always be another 'genius' to replace the one you just burnt out.
Posted by Mark Gardiner at 3:01 PM