After 'the (mezzo-)soprano' will Trader Joe's sleep with the fishes? 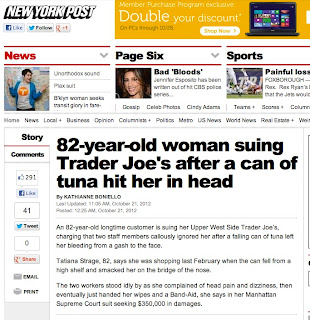 The reliably sensational New York Post reports that an 82 year-old grandmother is suing Trader Joe's because a can of tuna fell off a shelf and whacked her on the bridge of the nose. Her claim is that two Crew Members at her local shore (on Manhattan's Upper West Side) callously ignored her, then eventually handed her some wipes and a band-aid.

The pain of her nose wound and (claimed) headaches will, presumably, be assuaged by the $350,000 that she's suing them for.

Good luck with that.

This story, which the hilarious blogger 'The Gothamist' has dubbed "the single most Upper West Side lawsuit in history", would probably never have happened if the Crew Members in question had responded in a more sympathetic fashion. Oh well, I guess good help is hard to find, eh?

I was glad to find this post on The Gothamist, because it linked back to another hilarious post with the denouement of famous 'Pad Thai' incident. That story goes back to the early days of Trader Joe's in NYC. Shortly after the chain opened its New York flagship store,  a prominent physician and an opera star got into a slapping match over a package of frozen Pad Thai. That was widely cited as an example of the frenzy that Trader Joe's triggered among Manhattanites who were already spoiled with food choices. (And, one might presume, just spoiled, period.)

I never realized that the case had actually gone all the way to trial.

If Trader Joe's did advertise, it could create a couple of great spots out of all this. Who nose where to find great tuna? Pad Thai worth fighting for...