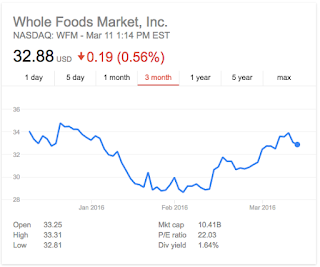 So is this a good time to buy in? Maybe, but as an afficionado of the Trader Joe's business model, I'm put off by Whole Foods' recent announcement that it was going to cut 1,500 jobs. Trader Joe's outperforms in the grocery category in large measure because it is way overstaffed, by the standards of typical market.
Posted by Mark Gardiner at 10:22 AM No comments: