Satmetrix, a company that specializes in measuring customer satisfaction, just released its 2013 Net Promoter Industry Benchmarks study, and Trader Joe’s shoved the much-loved-in-the-Northeast Wegman’s chain off the top of the ‘grocery’ category list. That’s the good news, but the bad news is that while Trader Joe’s rose one position, its ‘Net Promoter’ score has actually dropped.

Trader Joe’s score was 63%, which suggests that for every person with mild-to-middling negative feelings about the brand, there are two people with strongly positive feelings. That was enough to put it at the top of the grocery category. The average of all grocery stores was a measly 36%, suggesting that overall negatives outweighed positives by 2:1.

Costco scored an impressive 78%, but Satmetrix classifies it as a department store.

Both Trader Joe’s and Wegman’s scores dropped in 2013; TJ’s fell by 10 points, while Wegman’s 20-point drop caused it to fall from first to fourth in the grocery sector. According to Satmetrix, an analysis of the full survey response suggests that Wegman’s relatively premium prices were at fault when customers said they would not recommend it.

Another factor in the fluctuating scores, however, are the statistical limitations of a 20,000-customer survey. That sounds like a significant sample. However, there’s ample evidence to suggest that most grocery shoppers do not travel far to buy food. Trader Joe’s has less than 400 locations, while Wegman’s operates in a strictly limited geographic area. Satmetrix’ report summary doesn’t cite the number of consumers who responded to questions about Trader Joe’s, but since TJ’s sells roughly 1% of the groceries in the U.S., the survey probably only reached a few hundred regular TJ’s shoppers, at most; with such a small effective sample size, it’s likely that the fluctuation is inside the margin of error.

Posted by Mark Gardiner at 7:44 AM No comments:

Trader Joe's beards the lion in its den

We note that Trader Joe's, which only recently arrived in the state of Texas, has yet to open it's first Austin store, but has already announced a third Austin location. By my count, the chain will have as many stores in Austin (population <1M) as it has in the Dallas-Fort Worth area (population >6M). 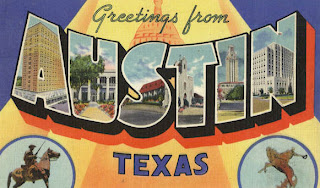 The strong showing in Austin probably reflects TJ's corporate assessment of Austin's lefty-liberal skew. In the rest of Texas, they call it The People's Republic of Austin. But it's also a direct dig at Whole Foods, which is based in Austin.

The two stores are very different, of course. Whole Foods carries far more SKUs, pays vastly more attention to fresh products and national brands, in much larger stores; it's premium priced, too. But, having worked at Trader Joe's, I can tell you that a lot of people come into Trader Joe's stores and load their groceries into reusable bags carrying the Whole Foods logo.

While I'm on the subject of rival grocery chains... There are persistent rumors that Trader Joe's, or Aldi, will acquire Tesco's failed Fresh & Easy chain here in the U.S. That could make sense, I suppose. (After all, I was one of the first people to suggest it.) But a more interesting development would be for Whole Foods to use Fresh & Easy as a platform to fight Trader Joe's on it's own small-store/restricted SKU/own brand territory.

With the backing of Whole Foods, Fresh & Easy could position itself with far stronger organic/sustainable credibility, and encourage Trader Joe's customers to look closer at their favorite stores' environmental credibility.

Posted by Mark Gardiner at 9:10 AM No comments: