The keys to TJ's success with 'Millennials'

I was recently interviewed by Hanna Chalmers, the head of research at Mediabrands—the ad giant Interpublic's in-house nerd department. The topic was, Trader Joe's success with 'Millennials'. (Millennials=people who came of age post-2000. Some demographers define this group as people born between 1982-2004.)

The report was published by Initiative, a hip agency based in London, England, that is part of IPG. Here's the full text of my interview with Hanna. Do you agree with me? What do you think is the secret of TJ's success with younger consumers?


Since your customer service staff can already reduce your brand equity, you have nothing to lose by empowering them to increase it.

One reason I know I'm right about Trader Joe's -- by which I mean, I know TJ's built its brand on the strength of those chatty, cheerful crew members -- is that TJ's corporate culture has entered American pop culture. Check out this bit by Gary Gulman, appearing on the Pete Holmes show. It's as if he read 'Build a Brand Like Trader Joe's' and set about turning into comedy.
Posted by Mark Gardiner at 1:39 PM No comments:

A supplier outed, along with some unsavory business practices

One of the most popular items in Trader Joe's salty snack aisle are these peanut butter-filled pretzels. We used to sell case after case of these on days leading up to big football games, and I can only imagine how many are currently being stocked up in anticipation of the Super Bowl. 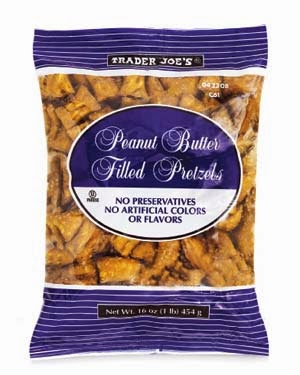 But they've left the owners and employees at a Maxim Marketing Corp., a California-based snack company, with a bad taste. According to a lawsuit between Maxim and Con-Agra, a giant food conglomerate based in Omaha, Con-Agra has stolen Maxim's Trader Joe's business.

Maxim's story is that, for years, Con-Agra supplied the pretzel "pockets" that Maxim filled with peanut butter and then sold to Trader Joe's. I'm not sure if Maxim claims to have actually invented the filled pretzel, but they do sell a similar product that they call, "The Original Pocket Pretzels®".

Now, it seems that Con-Agra has gone around Maxim, and is filling its own pockets.

Internally, Trader Joe's talks a lot about it's sharp—some might say, ruthless—buying practices. The story told to employees is that the company cuts costs in order to sell to consumers at the lowest possible price. But while eliminating one step in the peanut butter-filled pretzel supply chain has, presumably, resulted in a cost savings, Trader Joe's sells the Con-Agra product in the same packaging at the same price, $3.79 for a one-pound bag. (Maxim's original pocket pretzels are sold in other outlets, at a suggested retail price of $2.39 per 8 oz.)

Luckily, Maxim has other customers. Trader Joe's buyers love being a small company's only customer, though that has obvious risks because TJ's projects a "South Seas" vibe but the company acts more like a cutthroat pirate when negotiating supply deals.

Anyway, Maxim will miss the $10M in revenue from selling (my guess) about 7M bags of pretzels to Trader Joe's per year, but it will survive this setback. Whether it succeeds in its suit against Con-Agra will hinge on two things: did their contract include a non-compete clause, and; can a much smaller company possibly win a fight with a giant?

Posted by Mark Gardiner at 9:20 AM No comments: