A survey of over 6,000 people by Market Force recently concluded that Trader Joe's has the most-satisfied customers, and the ones most likely to recommend the store to others.

Quel surprise, eh? Or not.

What I find interesting about the Market Force survey is that it supports the thesis of my book, "Build a Brand Like Trader Joe's". 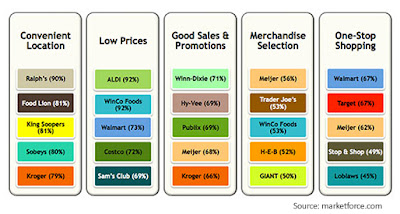 You can see that when customers are asked to rank the 'empirical' factors like price and selection, Trader Joe's rarely figures. Obviously, its fans like the selection of unique items, so it does well in selection, but that's it.

By contrast, when it comes to the touchy-feely criteria, Trader Joe's rocks it... 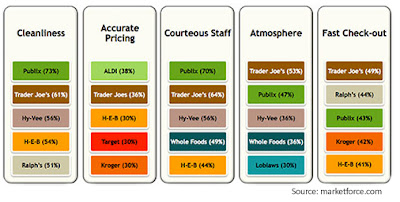 ...though one has to wonder about that "Fast Check-out" ranking! They must have limited their survey to shoppers who buy groceries before noon on Mondays and Tuesdays. But seriously, folks; as I note in my book, a cheerful checkout clerk undoes the frustration of those long checkout lines. That's what this survey reflects.

My premise, that the staff is what really creates the Trader Joe's brand experience, is supported by some of the many comments that have cropped up online, in the wake of this story breaking.

And, as I note in "Build a Brand Like Trader Joe's", the way you get that superior staff interaction is by paying a little more. Increasingly, customers are aware of the implications of shopping in stores that refuse to pay a living wage... 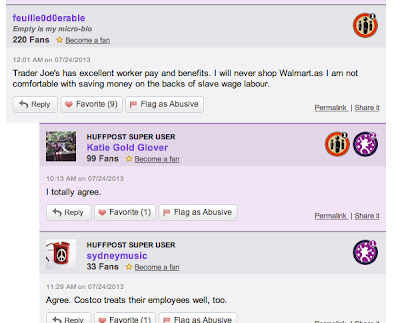 Meanwhile, in other survey news...

It seems as if Consumers Union, the activist arm of the respected magazine Consumer Reports, timed the release of information about its own Trader Joe's survey to coincide with news about its #1 status among grocery customers generally.

Consumers Union has been working hard for the last year or two to make Trader Joe's the poster child for its campaign to reduce antibiotic use in the livestock industry. It surveyed over 1,000 Trader Joe's customers and learned that...
I address the disjunction between what Trader Joe's does, and what its customers think it does in my book.

For more information on the antibiotics in TJ's meat issue, click here.

Posted by Mark Gardiner at 12:09 PM No comments: 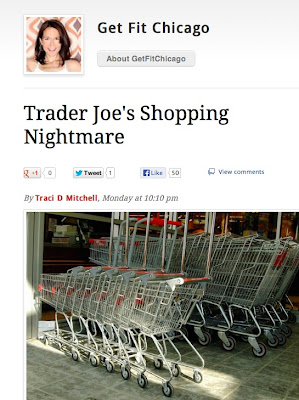 A popular fitness blogger posted a funny rant on the Chicago Now blog, that you can read here.

The blogger, Traci D. Mitchell, is pretty astute; she's a careful reader of packaging, and was shocked to realize that her frozen broccoli had been picked & packed, and shipped frozen... from China. Regular readers of this blog--and anyone who's read my book--will know that TJ's carbon footprint is not consistent with its brand image.

I thought she was also on the money (and funny) when describing a painfully slow-but-cheerful checkout experience, involving a little kid pushing one of those cute half-size carts, accompanied by his doting mommy. That's the downside to Joe's policy--and brand strategy--of extending those employee-customer interactions. Although it works overall, when it fails, it drives customers crazy.

For what it's worth, Traci, those small carts drove me crazy when I was doing the 'cart run' out in the parking lot. They don't nest with the regular sized carts, and slow the process of returning the carts to the store. Eventually though, I realized that anything that extended the cart run was actually good for me; it gave me a welcome break from the madness of the store!
Posted by Mark Gardiner at 6:07 PM No comments: