Consumer research gurus Onesixtyfourth, and their research arm CultureQ (hey, with names like that they have to be cool, if not prescient) recently surveyed the brand preferences of 'millennials' -- consumers born after 1981, who came of age after 2000. According to their survey, Trader Joe's has brand strength similar to Apple and Nike -- companies that spend exponentially larger amounts on brand advertising.

Interestingly, even though Trader Joe's is about a decade older than the Apple or Nike brands and has remained truer to its original concept than either Apple or Nike (both of which have radically evolved over their history) the millennials feel that Trader Joe's caters specifically to them. Readers of Build a Brand Like Trader Joe's will know that I make the case that the specific way Trader Joe's built its brand is noteworthy not just because the company eschewed brand advertising, but also because Trader Joe's brand building techniques are evergreen.

“Looking at the Q2 data of our CultureQ research, it’s interesting that Trader Joe’s has cultivated an eclectic, cult-like following among millennials, particularly those that we have identified as trend setters and early adopters,” said Anne Bahr Thompson, founding partner of New York-based Onesixtyfourth. 'Cult'. That's a word that keeps coming up, isn't it?
Posted by Mark Gardiner at 3:35 PM No comments: 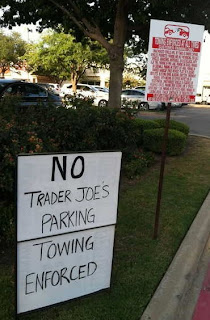 Trader Joe's recently opened in Fort Worth, and the Star-Telegram newspaper reports that the flood of new customers has angered tenants at the Stonegate Crossing Shopping Center next door. Now, a busy parking lot is to be expected at any Trader Joe's Grand Opening -- and in fact after the Grand Opening at my store (#720, Kansas City) the other merchants at Ward Parkway Shopping Mall were thrilled by the added Trader Joe's traffic.

But Trader Joe's has definitely messed with Texans' parking priorities in Fort Worth. As the Star-Telegram reports...

Roger Chieffalo, a Fort Worth real estate broker who has worked with Stonegate, is convinced that the German-owned chain knew it had insufficient parking before it opened. And judging from visits to Trader Joe's stores in other cities, Chieffalo believes it's a corporatewide strategy to get by with scant parking at the expense of neighboring retailers.
"Anybody who knows anything about this business realized they didn't have enough spaces," he told us. "How did they get a permit to open with the amount of parking they had?" 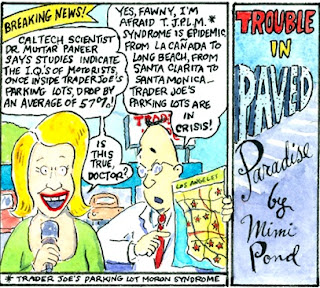 Now, that Texan real estate broker seems genuinely pissed at Trader Joe's. But the thing that interests me about most of these customers' parking lot gripes is that they're basically conveying a sense of "Yeah isn't it terrible, but it's what we all have to put up with to shop here." Most people wouldn't stand for this at any other grocery store. That really gets to one of the key points in "Build a Brand Like Trader Joe's" which is that customers who genuinely like your brand -- who think of your brand as one of their friends -- will cut you a tremendous amount of slack.
Posted by Mark Gardiner at 1:47 PM No comments:

One reason people love Trader Joe's is, they don't do this 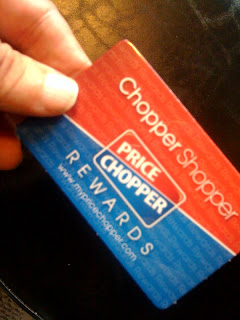 The other day, I went into a Price Chopper grocery store. I got to the cashier (I chose the 'express lane' because I only had a few items) and she asked me, "Do you have a Price Chopper card?"

These card scams drive me crazy. They might have worked for retailers when they were a new idea. I guess the first grocery store in any market that instituted a card might have actually got some 'loyalty' as a result. But nowadays virtually every store seems to do it, and most shoppers have responded by filling their wallets and purses with dozens of cards. As soon as everyone has every card, the cards stop encouraging loyalty; they just clutter up our lives and invade our privacy, as retailers keep track of our every purchase.

The cards are disingenuous in other ways, too. The big price on store shelves is always the 'card' price, so the poor sap that shops without a card actually sees a low price and pays a high one. And I am sure I'm not the only person who's infuriated by the idiotic "You saved twelve dollars and 88 cents," claim as I'm handed my receipt. Why not price a gallon of milk at $400,000, or $3.82 with a card, and tell me I saved $399,996.18? That would be really impressive.

One of the ways Trader Joe's has built up its loyal customer base (and, by the way, Trader Joe's is an order of magnitude more profitable than Price Chopper as a result) is by not insulting its customers' intelligence by offering them a 'rewards card'.

Normally, I try to avoid stores that operate this scam. But if I have to shop at one, this is what I do: When they ask me if I've got a card, I tell them no, but I'd like to get one. I carefully fill out the form using a made-up name and address, heedless of anyone waiting in line to use that cash register. Then I get a new card and my 'discount'. Then, as I'm leaving the store, I throw the card away.

Yes, I make them give me a new card every time I shop there.

So Price Chopper gave me my 88 cents off, and slowed throughput at their cash registers, and paid for the card, and will scan and store the fictitious customer data I provide. Call it passive resistance to this infuriating marketing scam. It's the equivalent of using the self-addressed envelope that comes with a credit card solicitation to return the solicitation materials to the sender.
Posted by Mark Gardiner at 1:39 PM 1 comment:

Tofutti Brands recently reported a 17% decrease in net sales, and admitted that "Sales in both the thirteen and twenty-six week periods continued to be impacted by the decision of Trader Joe's, formerly the company's largest customer, to discontinue stocking branded goods in mid-2011."

The companies that supply Trader Joe's products are always sworn to secrecy, but it's safe to now assume that Tofutti Brands was a supplier of some of Trader Joe's soy-based non-dairy cheeses and/or desserts.

Trader Joe's is a notoriously tough customer, with a reputation for hard bargaining to begin with, and a notable willingness to discontinue products when suppliers insist that costs must rise. That was almost certainly the case at Tofutti Brands, judging from this statement by Tofutti CEO David Mintz.
"During the first six months of 2012, our gross margin percentage improved due to the positive effect of price increases put into effect in the second quarter coupled with our ongoing program to eliminate marginally profitable products." I'll bet that Tofutti realized that Trader Joe's had negotiated prices which rendered its contract 'marginally profitable', but when Tofutti told TJ's prices had to rise, TJ simply dropped them as a supplier.

A supplier negotiating with almost any other grocer has some leverage by arguing that customers count on finding their products on the shelf, and that if they can't find them in one store, they'll go to a rival store to buy them. That doesn't work at Trader Joe's for two reasons:


Trader Joe's loves to be its suppliers' biggest customer -- and loves being a supplier's only customer even more. They have clout in with suppliers because they pay on time and they don't nickel-and-dime suppliers with slotting fees and marketing allowances. The risk to suppliers is, once Trader Joe's feels a supplier is depending on their business, they're merciless bargainers.

Posted by Mark Gardiner at 11:52 AM No comments:

An observation about, then a lesson from, another great cultural brand

Last week, my wife bought a plane ticket on Southwest.com. The next morning, she had five receipts for flights purchased in her email inbox. When she called Southwest to find out what was up with that, she got a recorded message telling her that she could expect to be on hold for up to an hour.

Southwest has a callback service, so Mary didn't have to wait on the phone. In about an hour, a Southwest customer service agent called her and told her there'd been a bit of a computer problem last night, and that some people had over 100 flights booked, when they'd wanted just one.

What was interesting, to me, as I listened in on the conversation, was that Mary wasn't really pissed off at Southwest, despite the fact that they'd made a screw up that could have caused her some real problems. Since she booked the flight with a debit card, it could have cause us to be overdrawn. Other customers using credit cards could suddenly have found themselves unable to use their cards after going over their limits. And let's face it, the problem really highlighted a flaw in Southwest's system. I mean, if one person books 100 tickets, shouldn't that get red-flagged for review by a human being before the transaction is put through?

But Mary was pretty cheerful, chatting away with the equally cheerful Southwest customer service agent. That was proof of my thesis that when you build a great cultural brand around authenticity and friendliness, your customers will cut you a huge amount of slack when they experience your brand in a way that would normally be very disappointing. I can flat guarantee you that any other airline that made that mistake would not just be dealing with thousands of customers with a complaint, they'd be dealing with thousands of enraged customers, many of whom would avoid that airline in the future. Not so, with Southwest.

After Mary hung up, we realized that even if we weren't too hurt by the mistake, others probably were. People probably had overdraft charges, it could even affect credit ratings. So I wondered if Southwest had gone far enough in merely canceling excess bookings and crediting back charges.

"They really should do something for us," she said. "At least send us some vouchers for free drinks."

"Yes," I replied, "or give you free priority boarding on your next flight." 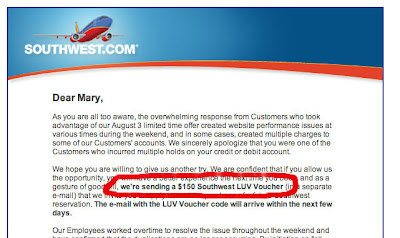 A few days later, Mary got an email from Southwest. The company admitted it had screwed up, and explained that customers who experienced any kind of financial penalty could submit claims and be fully reimbursed. And, it gave my wife a $150 voucher to be used against her next flight purchase.

One of Gardiner's Laws of Marketing reads: Nobody loves you as much as someone who just hated you. That rule means, really fixing a customer's problem doesn't just get you back to where you were in that customer relationship, it will actually improve your relationship.

That's right, you can strengthen your brand by disappointing your customer.

The two things Southwest could have done better were, 1.) instead of waiting a few days to send customers the email with the $150 voucher, it could have sent an interim email out saying, "Hey, we know we screwed up, and we promise you we're going to do right by you. Please give us a few days to figure out exactly what went wrong, which customers were involved, and how to make it up to you." And 2.) they could have explained what steps will be taken to ensure it doesn't happen again.

That would have got Southwest an A+ rating from me, but as it is they're a solid A- on their response. In summary, when great cultural brands disappoint their customers the keys turning disappointment into a brand- and relationship-building opportunity are transparency and authenticity. Brands should...


Posted by Mark Gardiner at 9:46 AM No comments: