Stuck in line at Trader Joe's? This guy wrote a charming essay about it... 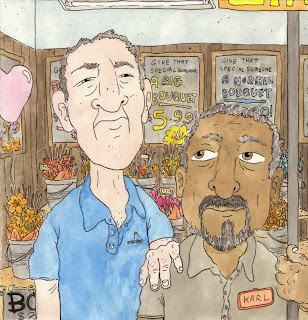 In the produce section of Trader Joe’s store in the Chelsea section of New York, Karl Holman holds an eight-foot-tall sign that reads “End of Line.” It’s six o’clock on a Tuesday, and Holman is managing the line for the second time this shift. While customers test peaches for ripeness, Holman holds the towering metal pole aloft, making the banner’s orange and yellow lettering visible to anyone who gazes up from the shelves. For the next hour, the line’s end moved constantly.

Short and stout, with a salt-and-pepper goatee and a grey Trader Joe’s T-shirt, the forty-nine-year-old Holman addresses a knot of stopped customers who are blocking traffic. “Are you ready to check out?” he asks. “Step right here.” Customers glance at his sign and then file into place.

As the line forms in front of him, he takes tiny backwards steps to keep pace with its telescoping end. His moving target keeps him in motion, and he marks it with the dedicated poise of a Beefeater at Buckingham Palace.

Starting by the tubs of cut pineapple, he inches deeper into the produce area, backing past the baby carrots and fresh herbs, past the clear bags of salad greens, and, while smiling and greeting passersby with a “Hi, how are you?” he hooks around a freestanding rack of fruit before stopping near the entrance. In a few minutes' time he has traveled so far back that, without meaning to be metaphysical, he has transcended the proverbial end of the line and arrived at the beginning.

To read the rest of author Aaron Gilbreath's wonderful essay, and see more of illustrator Marc Pearson's cartoons of life in a busy Manhattan Trader Joe's store, check out Narrative.ly
Posted by Mark Gardiner at 2:43 PM No comments:

It's not a SNAP, but we could eliminate food injustice

There’s been a lot of talk over the last couple of weeks about the reduction in SNAP (aka ‘food stamp’) benefits, which were the result of the end of the 2009 American Recovery and Reinvestment Act.

Although I’ve never received SNAP benefits — in fact, as a foreigner there’d be a five year waiting period, and after that, as an able-bodied adult without dependents I could only collect benefits for three months in any three-year period — I did work in the grocery business for a year while researching my book Build a Brand Like Trader Joe’s. I’ve got plenty of experience with the SNAP program from the other side of the cash register.

At the Ward Parkway Trader Joe’s store in Kansas City we served a very diverse community because the location was essentially astride two very different neighborhoods. The area west of our store, in Johnson County, Kansas, was upscale and predominantly white; the sort of well-off Republican voters who tend to sympathize with old Mitt Romney’s characterization of people receiving benefits as ‘takers’. The area immediately east of our store was also predominantly white but not as well off — the arty/liberal enclave of Waldo.

Troost Avenue was about a mile east of our store. Anyone who knows Kansas City knows that Troost has long been the border of the predominantly African-American community. Much of the landscape beyond Troost is pretty grim; it features drugs, gangs, and a school system so bad that the state of Missouri wrested control of it from school board.

While researching Build a Brand Like Trader Joe’s I handled hundreds (probably thousands, but I wasn’t counting) of SNAP transactions, serving people of all ages and ethnicities. Some looked ‘poor’ although our store was not really that easy to get to, if customers didn’t at least have access to a car. Most looked like many other ‘cash’ customers, which is consistent with the observation that most families that receive SNAP benefits are headed by adults who have jobs, albeit low-paying ones. I did EBT transactions for a few Trader Joe’s crew members, which tells you something; even though the store paid far better-than-average wages in the retail sector, most employees still qualified.

(As an aside, the well-off white customers from Johnson County often displayed the gulf of understanding between the 1% (or maybe the 10%) and the working poor in the service sector. I remember one guy about my age, obviously pretty well off, who commented that my job seemed a lot more fun and social than his job as an accountant. He told me, “I wish I could work here.” I told him that he’d have to be ready to take a pay cut. “Yeah, I guess I couldn’t afford it,” he said, adding “What do you guys make? Like, $20 an hour?” I just smiled and shrugged it off, but I thought, Is that really what you think?)

I can tell you from experience that most people who bought food with EBT cards weren’t buying booze as well (even though we sold plenty of beer and wine to people paying conventionally.) I saw one clear-cut case of something many people would’ve called ‘abuse’ of the SNAP program: a woman buying about 10 cans of tuna told me, “They won’t let you buy pet food with food stamps, so I feed my cats tuna.”

Ironically, poverty in America is marked by obesity, not starvation. The issue is clearly not that many people will starve because SNAP benefits have been cut, or would starve if they were eliminated altogether.

Anyone with a nuanced understanding of the American food industry knows that the system is stacked against a healthy population, from corn subsidies on down. This has resulted in a situation where Americans spend a very small percentage of their income on food, but 10 times as much as other developed nations on health care.

I’m not going to solve this problem in a single blog post, but I’ll tell you this: Some of the SNAP recipients who live east of Troost in Kansas City managed to get to Trader Joe’s. But many of the people who need SNAP benefits live in neighborhoods that are food deserts. Those people have no choice but to use their SNAP funds to buy expensive, unhealthy prepared foods in bodegas, convenience stores and gas stations.

Rich white people who are obsessed with ‘food stamp fraud’ would eliminate far more waste— and save far, far more on future health costs — by spending their time and effort figuring out ways to make healthy food available in poor neighborhoods.

The reduction in SNAP payments is a tiny part of a much larger food injustice issue. Let me tell you this: if the U.S. really set out to solve the problem of food injustice in its inner cities — if the country really made it a priority and, step by step, did whatever it took to ensure that the country’s urban poor understood and had access to proper nutrition — in the process of solving those problems, all the other problems of the inner city including crime, gangs & drugs; the collapse of public education in the inner city; the whole fucking poverty cycle... You’d wake up one morning and realize that you’d solved all of those along the way.

Posted by Mark Gardiner at 8:47 AM No comments:

Another Trader Joe's supplier outed, thanks to a food poisoning outbreak

That news emerged when Glass Onion was identified as the source of an e-coli outbreak that had sickened at least a couple of dozen customers in the western states. The company also supplies "Wheatberry" and "Southwestern" salad 'kits' to Whole Foods.

Personally, I think that anyone who buys a chicken salad made days ago and hundreds of miles away is playing fast and loose with their digestive tract anyway. If you're hung up on TJ's Mexicali Salad, try making it yourself with this recipe.
Posted by Mark Gardiner at 9:46 AM No comments: