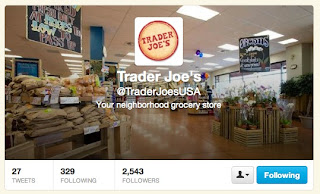 The Mayans may have been wrong about the end of the world, but something almost as earthshaking did happen just a week after the solstice. Trader Joe's launched an official Twitter feed. After years of being cited as an example of brands that flourished while ignoring social media (as well as just about any other kind of advertising or PR), TraderJoesUSA started tweeting. If it's not an official Trader Joe's feed, it's got me fooled.

Will Trader Joe's actually start communicating (more than trite recipes on the web site and too-clever-by-half soliloquies in the Fearless Flyer)? So far, it's only issued 27 tweets, and they all seem pretty innocuous, so it's too early to get excited.

It's not, however, too early to follow them. To do so, go here.