The Mayan Apocalypse prediction was a flop, but shortly afterward, we did get evidence that the end of the world is near. Yes, Trader Joe's has finally raised the price of its famous 'Two-Buck Chuck'. Yes, Charles Shaw wines will henceforth sell for $2.49 in all California Trader Joe's stores.

We called it 'Two Buck Chuck', but Charles Shaw wines always sold for $2.99 at my store here in Kansas City. Pricing varies based on state-by-state liquor taxes and transportation costs. According to NBC, the highest price was $3.78 in TJ's stores in Ohio.

Still, Trader Joe's was desperate to hold the original $1.99 price as long as possible in California. I'm sure they squeezed Fred Franzia as hard as he squeezed his grapes, in order to control that cost.

Honestly, I had trouble recommending it at any price. All batch processed wines vary, and while I occasionally tasted a Charles Shaw wine and thought it was decent at the price, I more often found it undrinkable. There are more than a few people who call it 'Two Buck Upchuck', but I think that's a cheap shot. (I did occasionally cook with it, and you can usually use it as the basis for a decent sangria.)

We sold several $5-$10 wines that were easily twice as good as our $2.99 Charles Shaw stuff. I always advised customers to buy something twice as good and drink half as much of it.

However, if you're really desperate for the cheapest possible booze, buy one bottle and taste it. If you like it, immediately buy a case or two. If you don't like it, try again in a month. It really varies quite a lot from batch to batch. 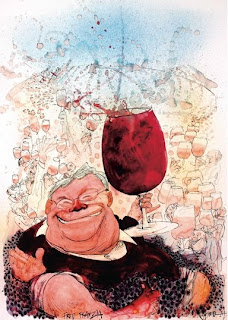 In the meantime, if you want to remember the good old days, when Two Buck Chuck was really less than two bucks, you can read a great article about industrial winemaker Fred Franzia and the creation of Charles Shaw wines here, in the digital archives of New Yorker magazine.

It remains to be seen whether Trader Joe's abandonment of the $1.99 price point will release other discount winemakers, like Barefoot, to raise their prices, too.

According to the unusually loquacious Alison Mochizuki, spokeswoman for Trader Joe’s:

We work hard to have every item in the store at an intersection of quality and price that highlights outstanding value. In general, our retail prices change only when our costs change.
We’ve held a $1.99 retail price for 11 years. Quite a bit has happened during those years and the move to $2.49 allows us to offer the same quality that has made the wine famous the world over.

Posted by Mark Gardiner at 1:27 PM