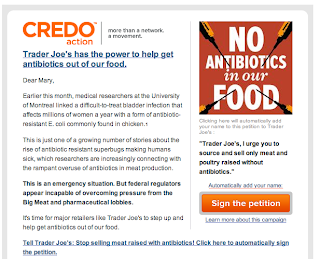 Trader Joe's is more and more often finding itself awkwardly shuffling its feet and looking down while it explains that even though many of its fans blur the distinction between 'all-natural' and 'organic', if it doesn't expressly say 'organic' it isn't. I once had a customer tell me that one reason she loved Trader Joe's was that all the meat was "raised cruelty-free". I wanted to say, "Uh, you realize all these animals were killed, right?"

The way to deflect criticism would be for a little transparency from the head office in Monrovia. Dan Bane could hold a press conference and openly discuss the issue. If they asked me to write his statement, I'd write this...


We understand consumers' concerns with the overuse of antibiotics. Trader Joe's sells lots of organic meat which is raised without antibiotics. Because it costs more to raise organic meat and maintain an organic certification, that meat, of course, sells for a higher price. The meat we sell that is not labeled 'organic' comes from the best sources we can find, at prices we think many of our customers demand.
We're often pressured by vocal advocacy groups. As a company however, we tend to listen to our customers. Our customers do get to tell us whether they want antibiotic-free meat, and they do so by choosing organic products. If more and more of them decide to buy organic, rest assured that a larger and larger percentage of our selection will be organic.

That approach, along with informative in-store signage and clear labeling, would make Trader Joe's a hero and source of public education on the issue. It would influence other stores and could shape large-scale farming practices. Everyone in the U.S. would be healthier if they ate less meat, of higher quality, and Trader Joe's could lead that charge. Sadly, the company's culture of secrecy virtually guarantees that won't happen.
Posted by Mark Gardiner at 10:45 AM